We’ve all heard the story of Benjamin Franklin and his lightning kites. And most of us know about Thomas Edison’s endless attempts at light bulbs. But these days, there are lots of different lighting options. The bulk of them are driven by aesthetics, but there are other factors too.

For the modern consumer, energy-efficiency is more important than style. This isn’t just about lowering utility bills. Bulb users are also concerned about energy conservation and environmental protection in general. So let’s look at which bulbs are the best for your pocket. 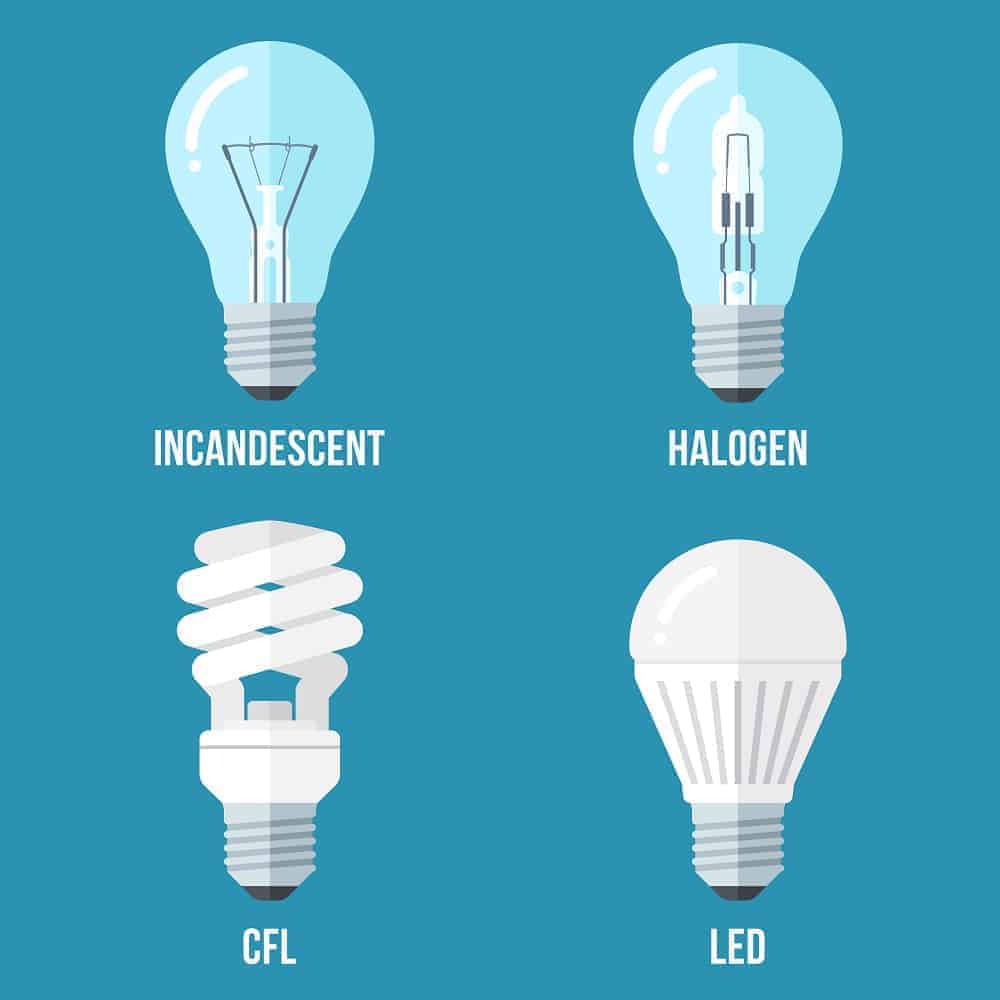 Have you ever wondered why your room feels colder (and quieter) during a power outage? It’s because energy can’t be created or destroyed. It can only be converted from one form to another. In the case of traditional light bulbs, heat energy is turned into light energy, though a lot of it gets wasted along the way. Unfortunately, that ‘wasted heat’ still uses up electricity.

So if you’re looking to make your light bulbs more energy-efficient, you can either reduce heat production, use up more of the heat released, or turn more of that heat into light. Different types of bulbs do this is different ways. Some create a vacuum inside the bulb so that the filament glows brighter and releases more visible light. Others use gases to brighten the light produced.

In some lights, the filaments and gases are omitted. Instead, semiconductors are used. These semiconductors pass an electric current through a diode with a negative charge. The electrons within the current release photons pumped full of electromagnetic radiation. When these photons collide and combine, they produce bright lights while using up minimal power.

When you’re dealing with light bulbs, some ideas may feel alien. For example, there’s a trend of using artificial LED grow light to simulate photosynthesis. This digs into the quality and intensity of light produced, and whether it can cause germination and growth. But on a more elementary level, it helps to know the difference between energy used and energy produced.

To start with, let’s look at the terms used within the light bulb space. They include:

To help us understand this better, let’s look at some common wattages and how they translate into brightness. We’re going to assess the luminosity (lumens per watt) of dim and bright bulbs. For reference, lumens are abbreviated as lm, Watts as W, and Volts as V. Roughly, incandescent tungsten bulbs produce 10 lumens per watt while CFLs offer closer to 40 lumens per watt.

While the premise of light bulbs is similar, their specifics vary. And it’s these variations that dictate how efficient your bulbs are. The goal is to harvest the maximum amount of heat and seamlessly convert it into light waves, so let’s see how each bulb category does that.

Point of note, bulbs were marked in watts until 2011 when the FTC (Federal Trade Commission) mandated that bulbs be labeled in lumens as well as watts. This allowed for more consumer transparency while making it easier for buyers to convert their bulbs as needed.

These are the ‘original light bulbs’. They’re made of a tungsten filament attached to the base of your light bulb. A glass globe surrounds the filament. The glass is usually clear, but it can also be tinted or colored of you prefer. The bulb gets extremely hot when the lights are on, so never touch a naked bulb. You risk scalding or even cuts if the bulb bursts on your hand.

Inside the glass, the manufacturer might load nitrogen gas to make the filament glow brighter, releasing larger amounts of light. The most common tungsten bulb for domestic use is the 60W bulb. It produces 700 to 800 lumens, but a lot of heat energy is wasted as it dissipates.

This means tungsten lights make your room significantly warmer. In other types of tungsten bulbs, the glass globe doesn’t have any gas in it. Instead, all air and other gases are sucked out leaving a vacuum. Both heat and light move faster in vacuums, so the bulbs are more efficient.

Tungsten bulbs stay in good working condition for up to 1,000 hours of use. They mostly produce warm, yellow light that’s about 2,700°Kelvin (warm white or soft white). This light temperature is often described as ‘soft white’. These bulbs are the most common … and the least energy-efficient. Their estimated efficiency is 8 to 10 lumens per watt. The rest is wasted.

They use the same technology as standard incandescent tungsten bulbs. The central filament is heated and the surrounding gases brighten the red-hot glow to release more lumens. Halogen bulbs get their name from the halogen gas that fills the glass globes. Apart from halogen, these bulbs (or lamps) are sometimes infused with bromine, iodine, or other inert gases.

In halogen lamps, the ‘filler gas’ doesn’t directly touch the hot filament. The filament is enclosed in a see-through glass envelope, which is in turn encased in a larger glass globe. Halogen bulbs are smaller than tungsten bulbs and they last longer. They don’t get as hot to the touch because there’s an extra layer of gas and glass between your fingers and the source of heat and light.

The luminosity of halogen bulbs (they’re more often labeled as lamps) is roughly 12 to 15 lumens per watt. This is a slight improvement on tungsten bulbs. So if you’d like to replace a 60W tungsten bulb with a halogen lamp, you’re looking at a 40W to 45W halogen bulb. Halogen bulbs are sometimes mounted in reflective cups to enhance light direction and intensity.

Fluorescent lights are popular in greenhouses because they provide illumination without interfering with your plants’ temperature settings. But if you want high energy efficiency for your gardening needs, you should probably opt for an LED grow light. It will reduce utility bills, and that’s essential since you’re also spending on irrigation systems, fertilizer, and pest control.

But while you’re setting up fluorescents in your indoor garden, think about configuration too. Old-school fluorescent lights were long cathode tubes that needed an elongated socket and a starter fuse. Today’s fluorescents can be seamlessly fitted into a tungsten socket with no additional customizing required. These bulbs are called compact fluorescent lamps (CFLs).

CFLs are still your typical cylindrical fluorescent tubes. But these tubes have been folded, curled, or coiled to occupy the same amount of space as a tungsten bulb. The two ends of the tube connect to a single socket rather than two cathode poles. And like regular fluorescent cylinders, CFL tubes are filled with mercury and other gases. They can last for up to 10,000 hours.

The luminosity levels on CFLs is 30 to 60 lumens per watt. Some fluorescents can produce as much as 90 lumens per watt. And because they’re fluorescent bulbs, they release ‘cool light or ‘blue light’. This light is roughly 4,100°Kelvin (bright white or cool white). High-lumen CFLs can get as high as 5,000°Kelvin to 6,500°Kelvin, which is the same as noon-time daylight.

These bulbs have become popular in recent years, so we think of them as ‘new tech’. But the first LED bulb was invented in 1962 by Nick Holonyak Jr. and his colleagues at General Electric (GE). Instead of using heat to produce light, LEDs use photons. LED chips are far smaller than halogen filaments or tungsten filaments and are sometimes mounted in doubles or triples.

The basis of an LED chip is a negative diode. When electricity passes through the diode, the electrons release photons. These photons mingle to release light. Because it takes very little energy to release these photons, and because their clashes produce so much light, LEDs end up being four to five times more energy-efficient than their tungsten cousins.

For the same reason, LEDs don’t get as hot as filament-based bulbs. And because the diodes are so tiny, you can fit more bulbs within the same space. That’s why LED strips are one of the most popular formats for LED lighting. LEDs are also commonly fitted with RGB filters that enable colored light. You can get seven or more color selections within the same LED strip.

Of all the bulbs we’ve looked at, LEDs are the most energy-efficient type. But because their chips are small and there are multiple diodes per bulb, the conversion isn’t that simple. If you’d like to replace a tungsten bulb or halogen lamp with LED, they have to use the same type of socket. Alternatively, just get self-adhesive strip lights that emit the same number of lumens.

This is a convenient option because it will drastically lower your power bills and it won’t need any labor costs or renovation fees. Just find a convenient spot – preferable at the corner of the wall and floor or wall and ceiling – and stick your LEDs strips. The walls are ideal because they reflect the light from your LED chips and helps then ‘travel’ further around the room.

The other benefit of LED replacement bulbs is the back-up factor. A strip of LEDs could have forty or even fifty chips along a two-foot strand. So even if some of the bulbs blow or fail, you still get plenty of lumens without spending extra money or electricity. And these strip lights offer fancy features like fades, rainbows, jump-lights, flickers, or even rhythmic light shows.

We’ve confirmed LEDs are the best source of low-cost high-intensity lights, so an LED grow lights is a smart purchase for your vegetation. To effectively photosynthesize, plants need extended periods of ‘daylight’, which is about 4,000°K to 6,000°K. Providing that much light consistently for 12 or more hours a day is sure t get expensive. This is where LEDs save the day.

Their diodes can produce over 7,000°K while only using up 500W to 700W per second. You should think about the distance though because LEDs this intense can scorch your plants. So if your LED grow light is 300W or less, position t a foot away from vegetation. If your wattage hits 1,000W or more, you need at least three feet between your bulbs and your plants.

For indoor plants with simulated light, LEDs are the smartest choice because they can survive for 50,000 to 90,000 hours of continuous use. The type of LEDs used in a greenhouse should be fitted with fans to keep them cool. This prevents heat damage and costly repairs, even though the power consumption of your fans will partially cancel out your savings in utility bills.

Switch on your Savings

So which type of light bulb is the most energy-efficient? Here’s how to figure it out:

What kind of bulb are you using at the moment? Show us a photo in the comments!

2 thoughts on “4 Types of Light Bulbs: Which is More Energy Efficient” 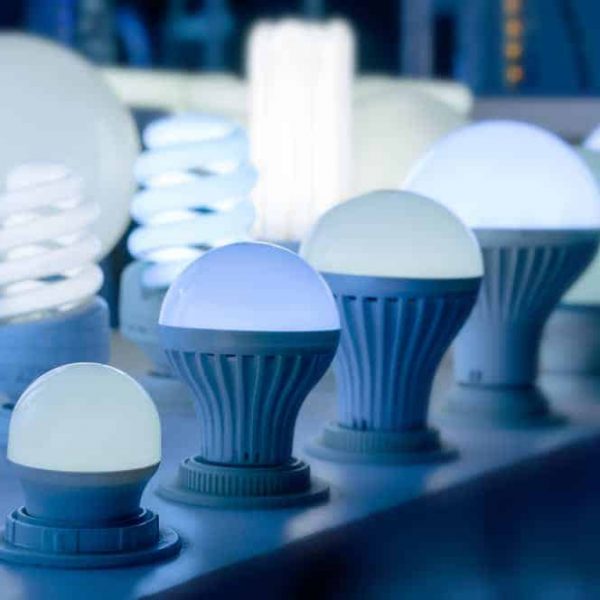